This is the third in a series of posts introducing Master Information Hub (MIH) development using the MIH Workbench. If you want to follow along with the example, you’ll need to take a look at the previous posts:

This post is just a few hints to get you started customising a maintenance UI generated for an MIH addition.

The user model generated in the previous post does not contain any diagrams. You can navigate and manipulate the model directly in the Project Explorer view but it is useful to have diagrams to show different aspects of the user model which you’re interested in, or when making modifications. There are a couple of quick ways to get UML diagrams depending on what you need them for.

If you’re just exploring the generated user model, Browse Diagrams can be handy. Right click on part of the model in the Project Explorer and choose, Visualize > Explore in Browse Diagram. For example, the diagram for Maintain Bookmark task looks like this:

Alternatively, when you want complete control over what to include in the diagram, or for editing the model, you can create a new Freeform Diagram. For the first modification to the user model I’m going to create a new freeform diagram called SocialBookmarkServices Domain. Right click on the model in Project Explorer and choose Add Diagram > Freeform Diagram. You can drag any model elements you’re interested in on to the new diagram from the project explorer, and you can add related elements automatically. For example, I added the following three user tasks:

…which leads neatly on to creating a domain for these user tasks.

The default user model does not include any domains, so when you initially log in you always have to switch to the goal view. One of Iain Duncan’s MDM Workbench blog posts explains how you can modify a generated user interface to only display the goal navigation method. To avoid making any code changes to the generated user interface, I’m going to create a new User Domain, so you can use both navigation methods instead. This approach would probably be more useful if your maintenance UI covers multiple modules.

Click on User Domain in the User Model section of the model palette, as shown below, and add it to the diagram. 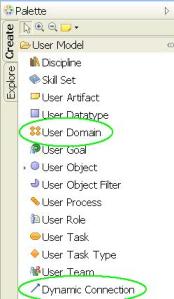 Then use the Dynamic Connection to associate tasks to the new domain. You should have a diagram that looks something like this: 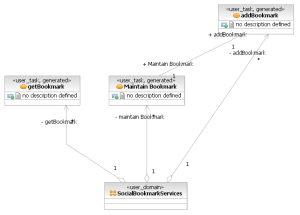 Republish the web application and log in to see the new domain. You’ll notice that there are only two user tasks under the SocialBookmarkServices domain. This is because the addBookmark task appears in the user model as a non navigable supporting task for the Query Data goal. We’ll fix that in the next section.

To get the addBookmark task to appear in the domain navigation you could just set the isNavigable property to True on the supporting task stereotype. Instead, I’m going to go further and create a new User Goal for adding data.

Create a new Add Data Goal freeform diagram. Use the palette to create a new User Goal called Add Data Goal. Drag the Default Role user role and the addBookmark user task on to the diagram. Then simply associate both of these to the new goal using the Dynamic Connection, as shown here:

Regenerate and republish the web application and you should now see all three tasks in the domain navigation, plus a new goal in the goal navigation. Those task names don’t look all that friendly though but we change improve them very easily.

The default task names are based on names from the module model, which may be obscure for someone using the maintenance UI. The task names aren’t actually too bad for the bookmark example but I would still prefer something a little less internal looking. The names on the UI are fully translatable using properties files in the UI’s help project, which makes it very easy to give them sensible names without needing to modify the generated user model.

Take a look in the generated ExampleHubUIHelp project. I needed to edit the orgModel_en_GB.properties file which was in the resources\i18n\ folder. Just edit the appropriate properties to modify what appears on the user interface, for example:

After republishing the web application, this what all the modifications look like: 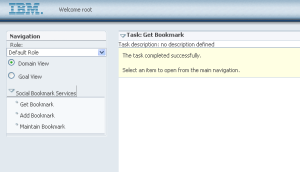 These are just a few ideas to get you started. If you change anything in the generated user model, make sure you remove the generated stereotype, otherwise your change may be lost if you regenerate the user model.

The maintenance UI looks slightly better after the modifications above, but it would be a bit easier to use if the SocialBookmarkServices model had some transactions that worked without knowing the primary key of all the bookmarks. Changing that will require some custom code in the MIH module as well as user model modifications, which should be enough for another post!