It’s been booked for months, and after much anticipation, B-day finally arrived yesterday! Hopefully we’ll have a spangly new bathroom soon, and the first major project since we moved in will finally be finished. Just to give you an idea about why the bathroom was top priority, here’s the before photo:

And it’s worse than it looks! Although, to be honest, it does actually look ever so slightly worse now… 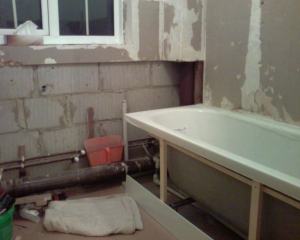 Update: we now have some useful tool cupboards in the bathroom! And a new floor. (22 March 2012)

Update: and I can reveal that the chosen tile orientation was… <dramatic pause> …landscape. (23 March 2012)

Bonus update: a hastily arranged plasterer has sorted out the newly tile-free wall, so we now have a grand total of one smooth wall in the whole house! (24 March 2012)

Update: well the tiling is finished, and they’re mostly all white. It’s just a shame they aren’t all the same shade so, having been repeatedly assured they would be from the same batch, I foresee a fun trip to the tile shop in the near future. (26 March 2012)

Update: and just as everything was starting to come together, it turns out that the toilet pan is cracked. Still, the new sink is looking good, and only has a minor leak! (27 March 2012) 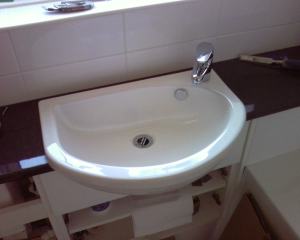 Update: I spoke too soon about being leak free before, but I think I’ve fixed them all now! I’ve also finished the painting and, after adding a minor dent to the new worktop, put the new blind up at the weekend. (24 April 2012) 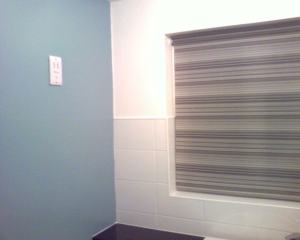 To be continued… almost there but I still need to fit the new light, and paint/fit the new skirting board. There may be bathroom cabinets and mirrors at some point in the future as well. That should be it though. Hopefully.