Despite the distractions of an impending baby, we’ve also been making a bit of progress on the house lately. Most of the major work is done (I hope!) so it should just be decorating from now on.

The war on leaks is going well and after ripping out the old toilet last year, the new cloakroom is almost done: 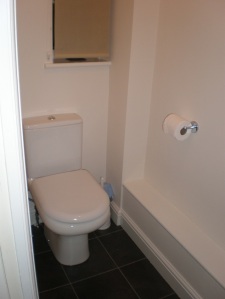 An even bigger milestone was finally finishing the front bedroom. I don’t think we have a before shot for this room because it was just too horrible!

From start to finish it took about 14 months to complete! That was partly due to getting other rooms done at the same time, but there were a few minor complications along the way: the floor needed a bit of work, someone stole part of the wall and, just when all that was fixed, even more holes were required to install a cable for the new boiler! I do hope we don’t need any extra holes now the carpet is down! 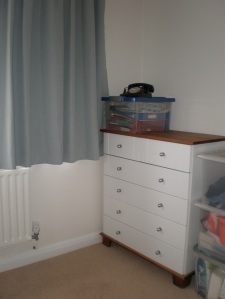 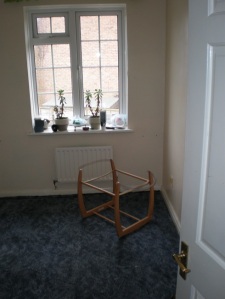 The old carpet has gone already and, fortunately, it looks like the floor is mostly ok! Which is lucky really: we don’t have 14 months to finish this room! Maybe not even 14 days!