Apparently 2012 is the International Year of Cooperatives. Unfortunately, after a small error of judgement with my Christmas shopping in December, there’s one cooperative which won’t be on my Christmas list next year.

The Co-operative Electrical Shop claim that they…

“…pride ourselves on our high standards of Customer Service and want you to be happy with your purchase.”

So, being keen on good customer service, I decided to pay marginally more to buy from them. This was a Christmas present, so I wanted to avoid any problems. Things didn’t get off to a great start when this arrived at the door… 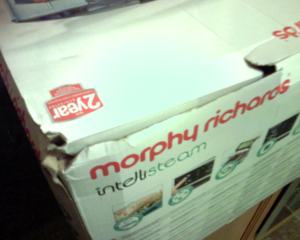 Just to clarify, that’s not the state it was in after opening any packaging. It arrived like that, completely unpackaged with an address label on the bottom! The other tiny problem with the lack of packaging, aside from looking like it had been kicked all the way from the warehouse, is that the intended recipient was the one who answered the door. Lucky it wasn’t a surprise gift or anything then!

Oh well, not a great start, but I’m sure a company so keen on customer service will only be too happy to rectify the mistake. I was feeling a little more optimistic after phoning their customer service line; there was no argument over a full refund and they arranged a pick up for the next day, since I was already going to be working at home waiting for another delivery. What could possibly go wrong…

One thing that could go wrong, and did, is no one showing up to pick up the return! When I phoned to find out why, it appears that they managed to miss off my house number when booking the parcel company pick up. So, two mistakes. Unlucky. They pride themselves on customer service though, so at this point I’d expect some serious effort to put things right.

I was disappointed. I wasn’t able to work at home to wait for another attempted pick up the same week, and despite explaining that a shorter time slot than all-day-maybe or at least a Saturday might be a good idea having been messed about so much already… the computer said no.

At this point I’d like to point out that eSpares managed to deliver 1 minute in to a very specific one hour delivery slot at the same time of year, and they got the order right first time! I mention this because it’s nice to point out that I don’t always complain… and because they gave me a recommend a friend code!!

So, to cut a long story short, they did eventually pick up the ‘parcel’, and they did eventually refund my money, but I’d call that grudging just about managing the legal minimum of customer service, and certainly nothing to be proud of. I wrote to point this out but unsurprisingly no one bothered to reply. Not even a stock, we got your letter and are basically going to ignore you, response.

I won’t be making the mistake of using the Co-operative Electrical Shop again. I’ll be sticking to these instead:

Updated: I haven’t got round to posting about John Lewis yet but they aren’t as good as they once were. (19 November 2012)

The Poles Lane post box is plastered in tinsel so it must be time to accept that it’s almost Christmas. For everyone I haven’t managed to send a card to, here’s a little tree inspired rhyme…

We three trees, not in a park,

One in an office, one in the dark,

One on a table, that’s not very stable,

It’ll probably end with a spark! 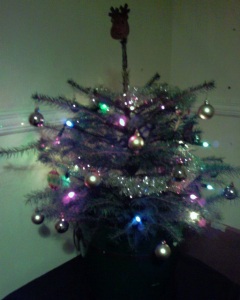 It’s lasted a few years but sadly our old Christmas tree failed the strictest quality control standards required for indoor duties. Luckily there was an opening for front garden decoration, so it’s not out of work just yet. Doing a fine job too I think: 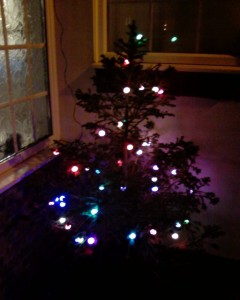 The lights are plugged in to a Home Easy socket, so I may be dusting off the arduino to control them, which would be an ideal excuse to give a Pachube Dashboard a try… as soon as I’ve finished the Christmas shopping that is!

(The tree is in for its third year, but it’s the first time the polar bears have been monitoring our electricity usage!)

I was only planning to have a quick play with the LCD display I bought recently, but ended up finishing off my Arduino + Home Easy polar bear controller project as well. Not that it actually needed a display you understand, but I’d wired it up, so why not! 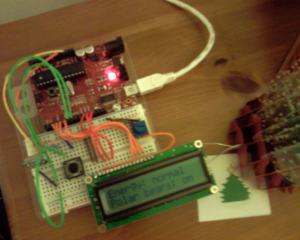 …complete with a manual override should it annoy Jo a bit too much! I finished a bit ahead of schedule in the end; the polar bears aren’t actually out yet… because it’s not Christmas! I have dug the tree up though, and as soon as it’s indoors we’ll have some ambient bears to tell us when to turn something off. Here’s the sketch so far, warts and all:

No polar bears have been harmed in the making of this post. At least not yet anyway.

Update: Seems to be working quite well, although the manual override button seems to have problems- it seems to randomly flip back on when I want it to stay off. Still, the button works well enough to pair with a Home Easy socket which is the main thing. Tree and polar bears should be up this weekend. (16 Dec 2009)

Fits my car’s cup holder perfectly and keeps the screen in just the right spot. Plan A had been to use an old plastic bottle with some stones in, but that wasn’t quite so stable. (Might have worked better with a different size bottle, or in a different cup holder for that matter.) Using a tin also means I have some emergency rations in the event of any really bad traffic jams!

Must have gifts for anyone with a sat nav next Christmas?

I actually do like Christmas. It just isn’t Christmas yet, not that you’d guess with the Hedge End illuminations lighting my way home. We aren’t the only scrooges on the street though, the festive glare comes to a sudden end with a garden full of neon reindeer about half way down the road. At least, the reindeer are usually lit up- I must admit I was just a little disappointed that their fuse seems to have popped tonight. I suppose Christmas is getting quite close now…

Quite looking forward to seeing the polar bears again, and this year they’ll be radio controlled!

It looks like I missed the winter solstice while I was asleep this morning, although at 06:08 (according to Wikipedia!) on the first day of my Christmas holiday I was pretty unlikely to be awake! Looking forward to some longer days now, especially after waking up earlier this week assuming I still had a few hours in bed because it was so dark, only to realise it was 7 o’clock and my alarm was about to go off. Not a good start to the day!

I was pretty sure today was the shortest day this year, but I noticed a few places claiming it was yesterday, and it seems there was some confusion last year as well when people celebrated the solstice a day early at Stonehenge! At least everyone should get the day right next year! I actually keep meaning to go along to Stonehenge for the winter solstice sunset one year but failed again this year.

On the subject of dates and things, I highly recommend The Calendar: The 5000 Year Struggle to Align the Clock and the Heavens and What Happened to the Missing Ten Days by David Ewing Duncan – very good read.

Snow filled penguin bauble and polar bear lights (they’ll just give you a funny look if you clap at them!), and there’s a Rudolph hanging around somewhere as well.

The postings on this site are my own and don’t necessarily represent IBM’s positions, strategies or opinions.
Notes from a small field
Create a free website or blog at WordPress.com.
Loading Comments...