After a long wait, I finally have a TLC5940 LED driver chip, so I’ve been making a bit of progress on my ambient orb project. The LED driver works well with the little RGB PCBs in the B&Q disco light after a bit of hacking, cutting tracks to the original controllers and soldering a few wires on to the LED leads. The final ingredients are a Freeduino Nano to squeeze inside the box, along with a 433MHz AM receiver.

So the hardware is mostly sorted, but what about the software? That I’m not quite so sure about. Here’s a vague list of requirements:

My current thinking is that the home easy protocol might be sufficient to send information to the orbs. It is limited, but I think there is also a limit to how much information the ambient device can convey before it stops being ambient. If I have to spend time decoding what it’s trying to tell me, I may as well have messages on a screen. The other potential advantage of using the home easy protocol is the possibility of using home easy remotes to select the information being displayed. A simple protocol also means that simple devices could control the ambient display directly, without requiring an always on server in between.

That covers the wireless connection. My plan is to use the USB connection to send animation information to the device, since this is beyond the home easy protocol. For example, to indicate traffic problems; top orb is alternating dim red and bright red, middle orb is dim amber, and bottom orb is dim green.

Simples! Well, in theory. I’m still thinking about a protocol that would capture the kind of ambient animations that I’m after. If there were several single orb animations, and several multiple orb animations, how would these be shown? Automatically? Based on some notion of priority? Manually using a remote, even though this seems less ambient?

I would love to hear if you have any comments or suggestions.

Update: The disco lights are almost back in one piece, and glowing a bit like they did originally! Just need to solder on the wireless module and get on to the software side! (16 April 2010)

Well, the polar bears have begun their migration back north to the loft. It was my first experiment with an ambient device and the Christmas tree was certainly hard to ignore, especially when Jo complained the bears had gone off again! As a result, I updated the arduino sketch a bit to just briefly flash the bears off every three minutes when our energy use was high instead of turning them off completely. Still annoying apparently (kind of the point!) but the bears did manage to stay under arduino control all Christmas with only a few breaks on manual! A few observations now that the experiment is over:

I’ve been having another look at controlling Home Easy devices recently, after some encouraging successes from other people on twitter and the Home Easy page on the Arduino wiki. There was already a class for receiving Home Easy signals but I’m plotting some techno polar bears at the moment so wanted a simple Arduino library for sending Home Easy signals.

After digging out an ancient C++ book I’ve now got working library, complete with example. I kept it very simple to start with so there are a few more bits still to add, like setting a specific controller id or sending a specific device code, but I’m quite pleased with the result. Here’s the sample for using the library…

Just get in touch if you want the library.

Updated: managed to upload the library to the Arduino Home Easy wiki page.

I recently discovered that someone has created a useful looking Home Easy Hacking Wiki to pull together what information there currently is about hacking a range or related home automation hardware. Unfortunately it doesn’t yet answer Jerd’s question about the automatic protocol, so if you’ve got something working, it would be fantastic if you could add a few more details to the wiki.

Hoping to get back to finishing off a Freeduino Home Easy controller before too much longer- I didn’t even get as far as unwrapping the transmitter last time! I’m currently wondering if the Finite State Machine library that Mike used in his latest project would be useful to handle transmitting and receiving from the same controller.

If you’ve done anything like this before, any tips would be most welcome!

Update: maybe the Southampton Hack Day (via Benjie) would be a suitable opportunity to work on this. (4 Sept 2009)

Must get round to finishing this off myself sometime soon! Here are a couple more people who have Home Easy working with the Arduino:

Largely thanks to @barnybug, the Home Easy Arduino hacking has been going really well. Making an LED blink is one thing, but making it blink by pressing a button the other side of the house is quite another! I’ve currently just been receiving signals, but when I’ve got the transmitter going as well, I want to do things like only relaying an on command to the socket if the current energy use isn’t too high. (Would be nice to have that working in time for Home Camp, but no promises.)

Should anyone else want to get going with some Home Easy hacking as well, I’ve created a Home Easy page on the Arduino wiki. So far it’s mostly just the sketches from Barnaby but I’m working on using interrupts instead, with the eventual aim of creating a Home Easy library for the Arduino. (There’s a Google code project for many RF protocols at once, but I just have Home Easy.)

Here’s what I have for receiving a Home Easy message with interupts so far which, with some even messier code, seems to do the trick. I would like to be able to register functions to call for specified controller/device codes, but not looked in to how that would work yet.

On a bit of a tangent from my Home Easy hacking, I’ve been experimenting with an alternative to the poorman’s oscilloscope. The arduino + processing hack is brilliantly simple but it wasn’t much use with the signals I was trying to look at.

Zelscope looks quite interesting but it’s a trial download, plus I wanted to keep the arduino end of the poorman’s oscilloscope hack the same if possible. The Universal Real-Time Software Oscilloscope GUI DLL Library didn’t initially look as interesting since I was hoping not to have to write any code. On closer inspection, it does have a test .exe which will import data, which only needed a tiny change to the arduino sketch from the original hack:

I do wonder if I could use the oscilloscope GUI DLL library directly from PowerShell. I get the impression that might be possible- I expect Dale will know the answer! For now, here are the results importing a file:

Not bad, although I’ve yet to see if it makes finding the signal I want any easier. Next week I’ll be at my mum’s house trying to find an actual oscilloscope which I used to have!

So I’ve done a bit of playing with the Freeduino and I can see why people like Arduinos so much: they really are simple to get working. It might only start with a blinking LED but it’s nice to feel you’ve achieved something so quickly. I wish more software was like that!

The reason for getting an arduino was to experiment with some more home automation, so I’ve ordered 433MHz AM transmitter and receiver modules which look (to the untrained eye) like they should work with my Home Easy sockets. Hopefully they’ll also be simple to wire up to the arduino as well! I’ve found a couple of projects which look like they might help get me started with the code:

In fact, combining infrared with Home Easy, to turn off a couple of sockets when putting the TV on standbye for example, might be interesting. The first thing I want to try (assuming I get it working at all!) is forwarding commands via the arduino. So, for example, the arduino could relay an on command to the living room lamp, but only if the CurrentCost reading is low enough (i.e. the kitchen lights aren’t still on)!

I’ve been using the simple oscilloscope hack to do some prototyping while I wait for the AM modules to arrive, and I’ve managed to ‘send’ a sample signal that looks about right. I’m not so sure about how good the timing is going to be though, and I’m still pondering about receiving Home Easy commands. Any suggestions about the best way to do this kind of thing would be most welcome!

I recently gave in to the temptation to get an arduino. I managed to put off buying one long enough for tinker.it to run out of the useful looking starter kits so I decided go for a bit of variety and ordered a Freeduino SB instead. It arrived ahead of schedule today and it looks like a really nice part assembled kit- I dug out my soldering iron at the weekend, and I’ve got a fresh reel of solder, so I’m all set to put it together as soon as I get a chance:

Assuming it works when I’ve finished with it, and I can get an LED to flash, I’m hoping to try and get it communicating with my Home Easy sockets (getting an LED to come on using the Home Easy transmitter might be the first step).

Being a complete arduino novice, I think I’m going to need some help to get that working! My plan so far is to get a 433MHz AM transmitter and receiver module (there’s an RS Trade Counter near me) and try getting the arduino to understand the Domia Lite specification. So that’s more of a vague idea than an actual plan really! If you can help, either with what not to do when connecting an arduino to those modules, or how to program the darn thing, that’d be great- please leave a comment below!

Update: Just soldered the last few parts on the freeduino, and it blinks! (27 Jan 2009) 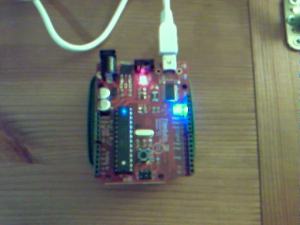 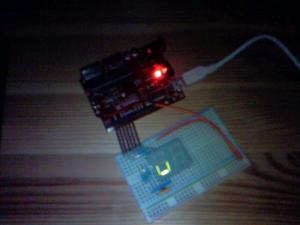 What next? Something useful?!