My first attempt at monitoring gas use with a CurrentCost development board was partially successful. I could get a reasonable idea of when the boiler was firing but I didn’t really find that information particularly useful. So, plan B was to actually count the pulses from the gas meter. The second circuit, which is described in the 8. More about triggering section of this 555 timer page, has been running ok for a few weeks now, so I’m thinking about actually soldering it together. Thanks to Richard for suggesting VeeCAD, which led me to TinyCad, this is circuit number two (much easier than using MS Paint!).

I’ve been using R1 and C1 values of 122k Ohms and 47u F for the 555 timer, to trigger an output pulse that’s just long enough to get transmitted by the CurrentCost development board (~6 seconds). I may yet tinker with the timing to make it long enough for three transmissions; the time between pulses on the gas meter is long enough and it might make receiving pulses more reliably.

Thanks to Mark and Andrew for some ideas for laying out a circuit on strip board, here’s what I hope is the same circuit using VeeCAD:

Might get the soldering iron out next time Jo’s away!

Update: For plenty more advice on moving from breadboard to a more permanent prototype, have a look on the Evil Mad Scientist Laboratories blog. (11 March 2010)

Update: Finally got round to pulling everything off the breadboard and soldering it together… 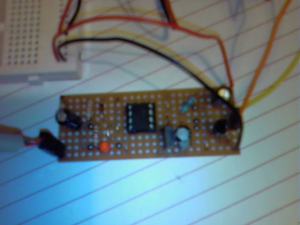